No CommentsPosted in Blogby Ben

The story of what happened this morning actually takes place almost a week ago. I was at church teaching a 5th-7th grade Sunday School class last Sunday and at the end of the class, we were going to pray for each other for the upcoming week. I asked each of the kids what I could pray for them about and they all said that they were not happy about having to go back to school on Thursday and Friday. So I suggested that we pray for a snow storm so that they could all enjoy a little more vacation. They thought that was a great idea. Fast forward to this morning and just about every public school system in this area has closed because of the snowstorm that happened overnight. God really does have a sense of humor.

I had to run out to an appointment this morning so I went out early to start clearing the ice and snow off of the car. During the time I was clearing my own car, I saw a Real Man of Genius at work. The picture below demonstrates how real men use swords to clear their cars of snow and ice. 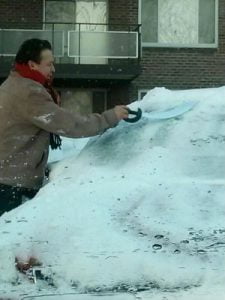 I lived in one of the athletes’ dorms that were a little over a mile away from the main campus. One night we had a bad ice and snow storm. Those of us who were familiar with snow and ice went out to our cars early to start chipping away at the ice and snow. In fact, there was so much snow that I had to enter my car through the trunk because all the doors were frozen shut. Once I was able to start the car it made it easier to open the car door and begin my scrapping of the windows.

As I was scrapping the ice off the windows I noticed one of the “genius” owner of a bright red BMW trying to get into his car but was unsuccessful due to the ice. He all of a sudden got a bright idea and ran back off to the dorm. A few minutes later he came running back to the car with a MASSIVE pot of BOILING water. And before any of us in the parking lot could stop him, he tossed the boiling water directly on his front windshield.

While the front windshield shattered into a million pieces, the shocked look on the genius’ face was priceless. The only thing that topped that face happened when I passed him on the way to school where he and his three friends shivering while they drove their BMW to school WITHOUT a front windshield.

I hope you all have a safe and wonderful snowy Friday.

This site uses Akismet to reduce spam. Learn how your comment data is processed.